Are you “Competing with the Wrong Tools?” According to a recent readership study conducted by Harvey Ad-Q for Consulting-Specifying Engineer, Turchette’s trade print (golf) ad for Fujitsu General America was among the top performers for reader recall in the May issue.  A similar (soccer) ad concept for Fujitsu also won two b2b readership awards earlier in the year. Both ads (below) featured page-stopping visuals and are alternating throughout the year in 18 HVAC publications.  A digital campaign is also running in similar media outlets. 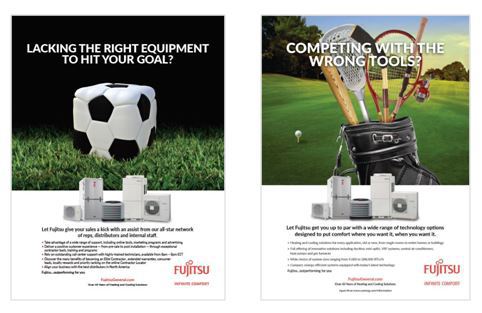 In addition, Turchette earned a Jersey Award from the NJ Ad Club for its three-part Fujitsu b2b trade print advertising campaign in 2016.